Engine oil is a lubricating substance used in vehicle engines, particularly in internal combustion engines. Engine oil is also known as motor oil or engine lubricant. Engine oils are characterized by their viscosity.

Engines have lots of moving parts, which are subjected to lots of friction.

If unchecked, friction may cause wear and tear of engine parts.

Hence, lubricating substances like engine oil are necessary to be used in engines to reduce friction between different engine parts and increase engine life.

Engine oil is a good engine lubricant. It is made from base oils or base lubricating oils (like grease) and certain special additives.

These are very important for internal combustion engines.

Internal combustion engines are those engines which normally function by burning fuel within the engine body.

This fuel combustion is responsible for driving the engine which in turn will drive the vehicle.

The internal combustion engine will be subjected to very high temperatures, almost up to 600 degrees Celsius, as the fuel has to be burnt within the engine.

When a lubricant is under such conditions, its viscosity may change and this can affect the engine’s performance.

Viscosity is one of the key parameters that describes engine oil. Viscosity is the property of a fluid that determines how fast it flows.

Hence, the Society of Automotive Engineers (SAE) gives a particular numerical grade to oil based on its viscosity. Thicker oils have a higher grade and thinner oils have a smaller grade.

Similarly, the oil is thicker at higher temperatures.

Some specifications to look for in 10w30 oils are API SN, ACEA rating and its viscosity grade.

API SN is an engine oil category introduced by the American Petroleum Institute that describes the oil to meet certain specifications.

The engine must be able to protect the engine’s piston from any deposit made by the fuel combustion. It must have better sludge control, that is, it does not result in forming any undesirable gels or sludge at higher temperatures.

The oil must be seal compatible and after treatment compatible.

The 10w30 engine oil meets the requirements of the API SN.

Features and Benefits for 10w30

10w30 has many benefits and unique features.

It forms a continuous layer over all engine parts so that the friction between moving parts is reduced. They reduce wear and tear of the engine during the start/stop operation while also keeping the engine cool.

They also protect the engine parts from getting rusted. On the whole, 10w30 engine oil increases engine life.

A smooth clutch and gear operation can be obtained. Noiseless engine operation is thus possible.

It retains viscosity even when the temperature fluctuates over a wide range.

Lastly, this lubricant can be used in engines using advanced fuels like biodiesel or biofuel.

It is also mainly used in vehicles which are supposed to carry heavy loads or haul heavy luggage.

It has a low viscosity grade at lower temperatures which means the oil is thin at such temperatures.

Similarly, the oil is thicker at higher temperatures.

5w30 engine oil meets the API SN requirements and has an ACEA grade depending upon the oil brand.
5w30 also contains MB approval.

MB approval refers to Mercedes Benz specifications that assign a certain grade to the engine oil. The MB grade of 5w30 again depends upon the oil brand.

5w30 has many benefits and unique features.

It forms a continuous layer over all engine parts so that the friction between moving parts is reduced. They reduce wear and tear of the engine during the start/stop operation while also keeping the engine cool.

They also protect the engine parts from getting rusted. On the whole, it engine oil increases engine life.

They have superior thermal stability, that is, they maintain their properties even when the temperature varies wildly.

It also is designed in such a way that it minimises oil consumption as a very small amount of engine oil is sufficient lubricant for an engine. 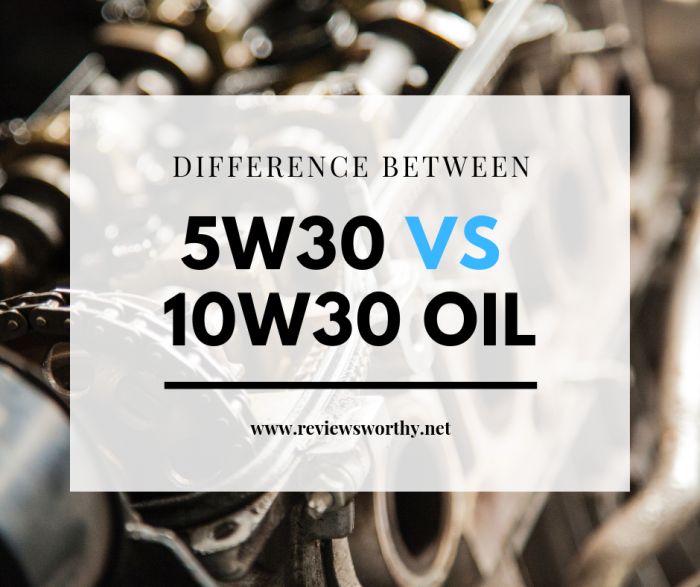 The main difference between 10w30 and 5w30 engine oil is their viscosity grades. 5w30 is less viscous than 10w30. 5w30 is also the thinner engine oil of the two at lower temperatures.

10w30 provides sealing action in the engine due to the fact that it is thicker than 5w30 engine oil.

To sum it all up, engine oil is a lubricant used in engines so that it reduces friction between engine parts and thus increase engine lifetime. They are mainly characterized by their viscosity.

Added to wishlistRemoved from wishlist -4

Added to wishlistRemoved from wishlist -1