How to Get Internet in Your RV

Recreational Vehicles, or RVs, are vehicles designed to function as living quarters for humans. A typical RV has beds, furnace, heater, kitchen and a bathroom.

Another important facility which is completely necessary in today’s world is the Internet.

From communication to entertainment, work to recreation, the Internet is part of our daily life.

An average person in the present time is so much dependent upon the Internet that he/she cannot go without it for a few hours.

A good Internet connection is of paramount importance in an RV, so that the Internet may be easily accessed anywhere when travelling to even the most remote locations.

Hence, this article describes the various ways in which Internet access can be set up in an RV along with the step by step process.

Why is it difficult to have Internet access in RVs?

It is difficult to have a good Internet access in an RV because of the constant traveling preferred by most RV users. In remote locations like national parks, rural area, remote beaches, hilly areas, etc. Internet access is not guaranteed. Some problems of obtaining Internet in RVs are data caps and unpredictable Internet speeds.

Being an RV user means extensive travel and thus staying connected to the Internet can become difficult.
There is always the option of staying in one place.

Many RV users can opt for not using their own means of Internet connection as free Wi-Fi is available in most RV parks.

However, this free Wi-Fi has less security and it does not provide good speed Internet connections.

However, RVs are generally very mobile. The user may go to very remote locations like national parks, small villages, mountainous regions, etc., where there is no guarantee of the Internet being available.

Some problems faced by many RV users regarding their Internet connections are ensuring wireless connections, unpredictable Internet speeds and data caps (restriction on data transfer).

Therefore, RV users have to weigh multiple options and choose a good Internet connection which offers a fairly good and consistent speed, works well with frequent travelling and is very reliable.

How to get Internet in RV?

Here are some ways to get Internet in an RV. Many public hotspots and RV parks offer free Wi-Fi which can be used. Smartphone also have mobile data that enable it to access the Internet. Mobile hotspots can be set up to which laptops, tablets and other devices can connect to use the Internet.

The user may choose to remain in a fixed place to use the Internet. In this case, many non-mobile networks are available.

The user can also have mobile network options when they plan to travel.

Some solutions to the Internet problem in RVs are given below. 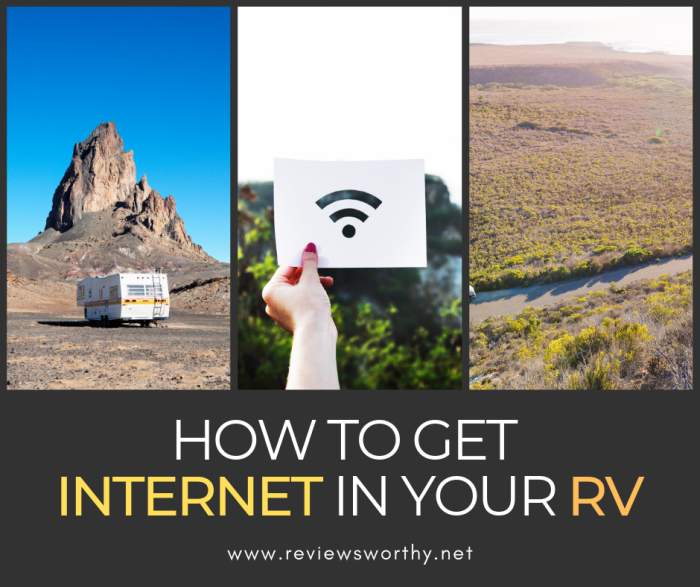 Wi-Fi can be accessed in the parking lots of such locations.

However, the public Wi-Fi may not be free in some places as they might have a password, thus ensuring only legitimate customers can use Wi-Fi.

This is easily the cheapest way to go online.

However, one disadvantage is that this Wi-Fi cannot be accessed anytime. Wi-Fi can only cover the area within a circle of radius 50 meters or even less.

Wi-Fi at public locations are unpredictable- they can either be painfully slow or extremely fast.

This kind of Wi-Fi is not reliable at all as its speed depends upon the type of connection used by the location but and the traffic faced by the network.

Many campgrounds and RV parks also offer free Wi-Fi that can be used by the campers. This is particularly convenient when doing certain tasks that may exceed mobile data.

Wi-Fi in RV parks and camping grounds are also similar.

Moreover, there is no guarantee that the camper can access this Wi-Fi at every location in the park.

While some parks use antennas to make the most remote places of the park Wi-Fi friendly, most parks have a central location where the Wi-Fi is placed.

Finally, public Wi-Fi networks are not known for their security. They are very prone to be hacked.

To sum it all up, public Wi-Fi is a good backup network and can be used for heavy downloads and streaming.

However, do not be very dependent on this Wi-Fi as its speed may not be the same always.

Also, it is not secure.

Therefore, campers are advised to use virtual private network (VPN) services and not perform any task that uses any sensitive information like mobile banking.

Wi-Fi antenna boosters are used to extend the range of the Wi-Fi signal coming from elsewhere.

They receive the Wi-Fi signal, amplify it and then transmit it again, thereby increasing the Wi-Fi range.

The first con of using Wi-Fi boosters is that they are expensive.

Again, these can only be used in areas where Wi-Fi is available such as the aforementioned ones. Hence, they cannot be used for making internet available on the go.

Also, the Wi-Fi made available by the boosters are also subject to speed and security problems as said before.

Some RV parks also use the comparatively older methods to provide Internet such as via dial-up connection.

RV users can connect to the dial-up modem placed in the parks. Again, these connections offer slower speeds. They are also not mobile.

Nowadays, every smartphone has mobile data, courtesy of the mobile network service provider.

The customer has the option of it being prepaid or post-paid.

The RV user is advised to browse various cell phone providers and choose the right one based on speed, packages offered and cost.

So now smartphones can be used to check emails, banking, mapping of routes and what not using mobile data. The Internet can be accessed anywhere during RV travel.

Laptops can also use the mobile data by getting tethered to the mobile hotspot.

Most mobile networks also support hotspot feature The Settings feature of most smartphones have the Portable Hotspot setting.

When turned on, they can allow other devices like laptops to get tethered to the hotspot.

Tethering can be done via USB cable, Bluetooth and Wi-Fi.

They resemble pen drives. They can be attached to the USB port of laptops to use their network data.

The system mainly consists of a modem, antenna, and receiver. The antenna catches the Internet signal beamed from space and the receiver and antenna make the connection available to the user.

However, the equipment required for setting up the system is very bulky and expensive.

Moreover, when the RV user uses satellite TV as well, he/she would require two satellite connections for both the television and the Internet.

The Internet is a high priority expense for most RV users.

For RV users that plan to do extensive traveling, mobile data, dongles, and satellite Internet systems are good options.

Smartphones can use mobile data to provide Internet access. They also have portable hotspots to which other devices like laptops can be tethered.

Dongles can be plugged into laptops like a USB and they can provide data to the laptop.

Satellite Internet involves the setting up of a sophisticated system that can then offer a good quality connection.

How Does a Tire Pressure Monitoring System work?

Anatomy of a Shoe : Know The Parts of Your Shoe