Home » Automotive » Why You Should Use Surge Protector in Your RV?

Why You Should Use Surge Protector in Your RV?

An RV surge protector is a device that protects electrical appliances in an RV from sudden voltage spikes and power surges. Surge protectors are generally installed in power distribution points like plug points and electrical panels. They are a very important device to be added in RVs.

A surge protector is a device that protects electrical devices from sudden, rapid changes in voltage and power surges.

Voltage spikes and voltage surges may result in voltages to rise to around 1,000 volts, thus making them very lethal to normal electrical devices which are normally not designed to work at such high voltages.

Surge protectors are mainly designed to short the circuit or short the current when a voltage spike occurs. In this way, the electrical devices never have to face the high voltage.

Surge protectors are generally designed as power strips or are installed in plug points, power distribution panels, electrical panels and communication systems. They allow multiple devices to be connected to it and used.

Like any house, an RV comes equipped with power outlets into which several devices can be plugged into and used.

And like any other house, RVs are also susceptible to sudden power surges and voltage spikes.

Thus, to protect the electrical devices being used in the RV while on the road, surge protectors are a must.

How does a Surge Protector work?

A surge protector works by diverting the excess current produced due to voltage spikes away to the electrical ground. A surge protector uses a hot wire which is connected to the electrical device and a ground wire that is connected to the ground. A metal oxide varistor or a gas discharge arrestor connects the two wires and is responsible for diverting the current.

The main components of a surge protector are the toroidal choke coil, hot wire, the neutral wire, and the grounding wire.

Depending upon the type of surge protector used, either metal oxide varistors or gas discharge arresters are used for protection from voltage spikes.

The surge protector is mainly concerned with supplying the correct amount of electric current to all the electric appliances connected to it.

If any excess current starts flowing due to voltage spikes, the surge protector diverts this current to the ground of the electric circuit through the grounding wire.

The hot wire is the connection between the electrical device plugged into the surge protector and the electric supply.

The hot wire is also connected to the ground wire.

The ground wire connects the surge protector to the electrical ground where the excess current flows to.

Metal oxide varistors, or MOVs, are so called because of their property of changing from a conducting to an insulating substance as and when required.

As their name suggests, MOVs are made of a metal oxide.

In MOV surge protectors, a MOV connects the hot wire to the ground wire.

The MOV remains unchanged when the voltage is at the correct level.

When the voltage supply is very low, the electrons in the metal oxide start flowing in such a way that the varistor gets a very high electrical resistance.

Due to this phenomenon, no voltage gets diverted towards the ground wire as virtually no connection exists between the hot wire and the ground wire due to the high resistance.

Therefore, all the current is diverted towards the electrical device.

When the voltage supply is very high, that is, during voltage spikes, the electrons flow in such a way that the varistor becomes conducting.

The excess current, therefore, flows through the MOV towards the ground and the device is protected from the excess voltage.

Gas discharge arresters consist of a gas tube containing an inert gas like neon, argon, etc. This gas acts in a way similar to the MOV.

The gas tube forms the connection between the hot wire and the ground wire.

Whenever the voltage is at the correct level or is too low, the gas remains insulating and therefore, no electric current is capable of passing through it to reach the ground wire.

Whenever the voltage is higher than usual, the gas gets ionized. Ionization refers to the process where the gas acquires a positive or negative charge and becomes conducting.

Fuses are made of a ceramic or a metal that melts when excess current passes through it due to the heat produced by the electric current.

When the fuse melts, the circuit is broken and current ceases to flow through it. The electrical device is consequently saved from the excess current.

Most surge protectors employ fuses as a backup resource in the event of the device being incapable of diverting the excess current.

Surge protectors can be portable or hard-wired into the internal electrical wiring. 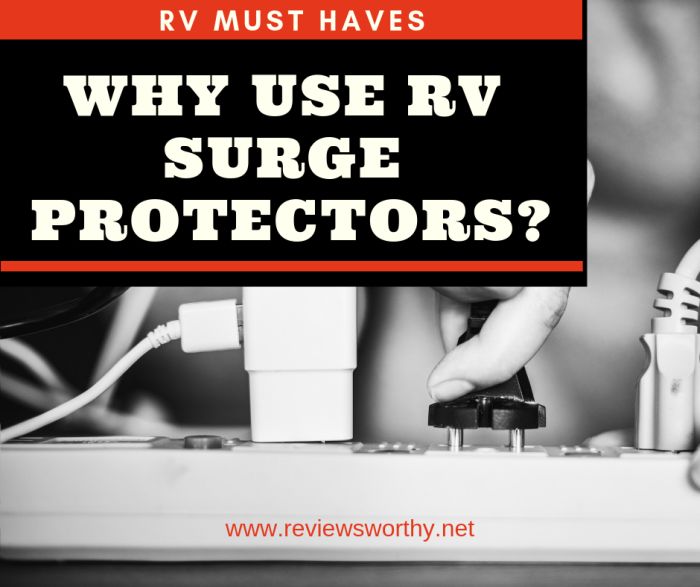 Benefits of using a Surge Protector in RV

Electricity is a must in everyday life.

Therefore, a portable electricity management system (EMS) is necessary for RVs where all electrical appliances can be used freely, without any worry about voltage spikes or power shutdowns.

A surge protector can be used as an EMS.

Surge protectors come in the form of an extension box with several power outlets.

This type of extension box can be connected to a power outlet. Several electrical appliances can be plugged into this box at the same time.

Surge protectors can prove to be a good resource during fluctuating power situations. They especially come in handy during unstable weather conditions where the power availability is unpredictable.

Some surge protectors can display the voltage it receives from the power pedestal continuously.

Also, when staying in RV parks or while boondocking, there is no guarantee of obtaining a good electrical supply. This may be due to excessive crowding, poor wiring or the remoteness of the location.

In this case, surge protectors are very helpful in effective power distribution.

How to Use Surge Protectors in an RV?

Surge protectors can be either portable or hardwired.

A hardwired surge protector is one that can be hardwired into the internal electrical wiring of the RV.

The main advantage of a hardwired surge protector is that there is no need to move and drag bulky equipment and connect to a power outlet as what is done with a portable surge protector.

Surge protectors are generally installed in power distribution points like plug points and electrical panels. They are a necessary facility to be added in RVs.

They can protect electrical appliances from sudden power fluctuations and voltage spikes during bad weather conditions.

Surge protectors can also effectively distribute power to all the electrical appliances plugged into it when the power available is low.

Added to wishlistRemoved from wishlist -4

Added to wishlistRemoved from wishlist -1