Blenders today have gone beyond their traditional function of blending.

They now grate, chop, grind and even make dough. Some of the top products in this category are the Magic Bullet NutriBullet NBR-12 and the Cuisinart SPB-600 SmartPower Deluxe Die Cast Blender.

The former offers all the mentioned function at a pulse speed. It is a personal blender. The latter is a family-sized blender that chops, grates, grinds and blends at four speeds.

The unique feature of this blender is the heavy base that ensures that it does not topple or move during the high-powered blending operation.

Some major features of both these blenders are given in the table below. 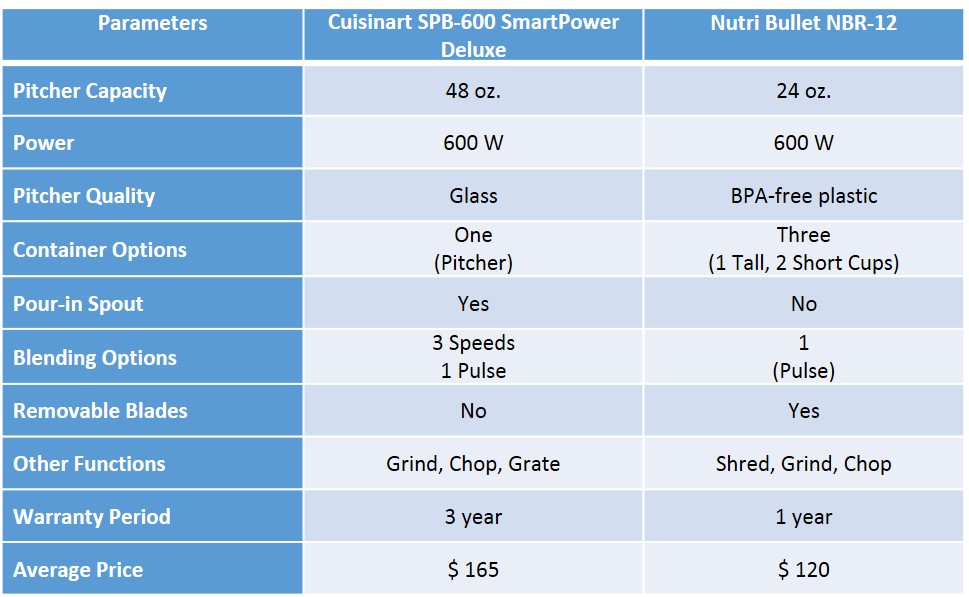 Looking at their key specifications, the blenders seem quite similar in their function. Let us take a closer look to identify what sets these appliances apart.

The Cuisinart SPB-600 SmartPower Deluxe Die Cast Blender rated at 600 W is considered an average blender when it comes to power usage.

The NutriBullet NBR-12 also has the same power rating. Fortunately this power rating enough to provide effective and consistent blending for most types of food materials.

The Cuisinart SPB-600 SmartPower Deluxe Die Cast Blender comes with one set of blades which are made of stainless steel. Their design is patented.

The company promises that these blades are sharp enough to crush ice and slice through delicate herbs.  The NutriBullet NBR-12 has two types of blades- the flat and the emulsifying blade. The company has identified that different food items require different blending techniques.

The emulsifying blade can be used for most blending functions while the flat blade is used for grinding functions only. Both these blades are removable and can be changed according to their use.

In this regard, the Cuisinart SPB-600 SmartPower Deluxe Die Cast Blender is superior to the NutriBullet blender since it offers four speeds. The speeds offered by the Cuisinart blender are- High, Low, Ice Crush and Pulse.

This blender also has a timing function which essentially stops all functions in 2 minutes. On the other hand, the NutriBullet only gives the option of Pulse.

Users are required to execute all their blending operations on the Pulse speed.

The glass pitcher has been tested for various temperatures and can withstand them. It also has a small measuring cup at its spout with a capacity of 2 oz. so that you can measure the ingredients before you add them.

The Cuisinart SPB-600 SmartPower Deluxe Die Cast Blender has a very strong and sturdy base. It is one of the main features of this product.

The appliance, essentially the base, comes in different colours- stainless, metallic pink, metallic red and black wrinkle. The base has several touch pad buttons for the different speeds (High, Low, Ice Crush and Pulse) and on/off option.

The base has slip-proof ‘feet’ so that the machine does not ‘walk’ on the counter during its powerful blending operation. The Magic Bullet NutriBullet NBR-12 blender also has a very strong base to support 600 w of blending.

However, it does not have any buttons on its base since it only blends on one speed (Pulse).

The Cuisinart SPB-600 SmartPower Deluxe Die Cast Blender has a spout above the pitcher with a measuring cap (2 oz. capacity) covering it.

The cap can fit easily into the pitcher and the gasket is leak proof. The pitcher also fits well in the base so that it does not allow the pitcher to slip during the blending operations.

The base is very strong with non-slip feet to prevent slipping.  The NutriBullet NBR-12 blender has a non-slip base.

The manufacturers have also identified the health issues related to plastics and have ensured that the pitchers are made of BPA-free plastic so that your food is not contaminated during the blending operation.

In this regard, the NutriBullet NBR-12 blender is superior to the Cuisinart blender since it has removable blades which allow the user to clean the appliance thoroughly.

Otherwise, the user is stuck with the job of removing food stuck under the blades which is a very difficult area to clean.

The Cuisinart SPB-600 SmartPower Deluxe Die Cast Blender can be replaced or exchanged within its warranty period of three years (limited period).

On the other hand, the Magic Bullet NutriBullet NBR-12 comes with a warranty period of one year (which can be extended to four years).

Both Cuisinart SPB-600 SmartPower Deluxe Die Cast blender and Magic Bullet NutriBullet NBR-12 blender can be returned to their manufacturers within a period of 30-days .

Shipping and restocking fee are liable to be subtracted from this refund.

When it comes down to making a choice, it is difficult to pick the best blender between the Cuisinart SPB-600 SmartPower Deluxe Die Cast Blender and the Magic Bullet NutriBullet NBR-12 since both offer the same functions (blending, chopping, grinding, grating) at almost the same price ($ 165 for the former, $ 120 for the latter).

However, when it comes to cleaning which is the most tedious yet important part of cooking, the NutriBullet will be a much better device.

So, you can make drinks and wash it easily many times which can compensate for its capacity.

To read customer reviews or buy Nutribullet use this link.

What are Baby Breathing Monitors (and Why Use Them?)

Advantages of Buying Ninja Blenders [Read Before Buying a Blender]