Fine dust particles in the air, such as seen in woodworking facilities have been known to adversely affect people coming into contact with them; leading to allergic reactions, poisoning, and even nasal cancer in certain cases.

A dust collector is used in various industries to remove pollutants from a gas, water, and air.

As the requirements of each industry differ, dust collectors come in various sizes and shapes.

How does a Cyclone Dust Collector work?

As is quite evident by the name, a cyclone dust collector makes use of the cyclonic motion to separate dust particles from the air stream.

Cyclone dust collectors make use of the centrifugal force to create a cyclone-like vortex for separating dust particles and other suspended matter from the air stream.

As soon as the airstream enters the cyclone dust collector, it is made to travel in a downwards direction with force.

With this rapid spinning of air, the coarser dust particles are separated and find their place into the first collection point.

Once the coarser matter is separated, the fine dust proceeds onwards along with the polluted airstream, eventually getting trapped at the second stage filter.

To see how the cyclone dust collector works, check out “How a Cyclonic Dust Collector Works” video here –

There are three basic types of cyclone dust collectors –

With the creation of a dual vortex, coarser dust is effectively separated from fine dust.

While the main vortex is made to spiral in the downwards direction, carrying most of the comparatively coarser dust particles with it; the inner vortex, on the other hand, is created towards the lower end of the cyclone, which while rapidly spiralling upwards also carries the finer dust with it.

The pressure drop for any normal operation in a cyclone dust collector is around 75-100 mmWG.

To get a clear 3-D understanding of the working of a single-cyclone collector, watch “How Cyclone Separator Works” here –

As the name suggests, multiple-cyclone dust collectors are so named because of the ‘multiple’ cyclones involved. There are a number of smaller diameter cyclones working in tandem, sharing a common inlet as well as outlet of gas. 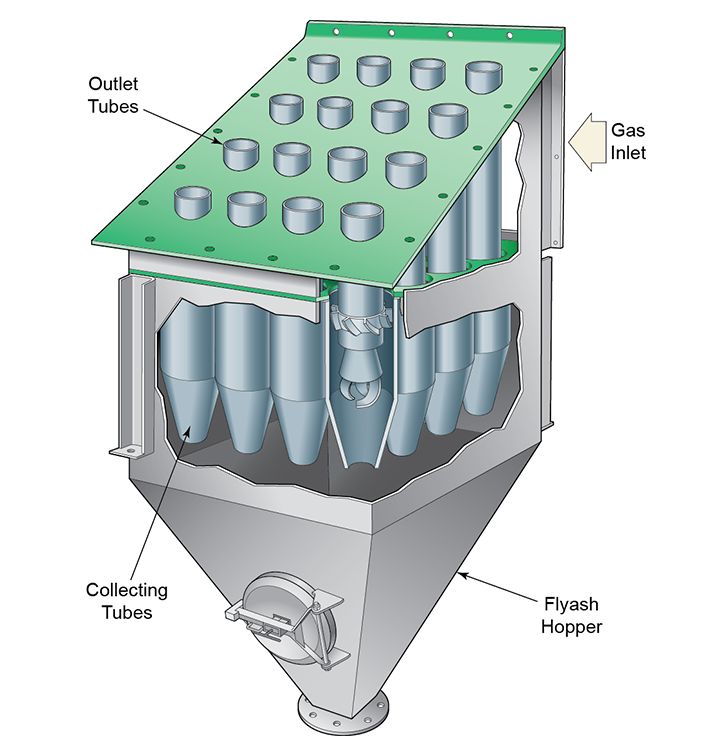 The main vortex moving downwards is paired with an inner vortex that simultaneously moves in the upper direction.

Multiple-cyclone dust collectors are also commonly referred to as multiclones .

For many plant managers, opting for a multiclone is an effective way of cutting back on emissions without compromising on production.

A multiclone has certain advantages –

Multiple-cyclone dust collectors are more efficient as compared to single cyclones as multiclones are smaller and longer.

With the longer length, the dust particles are acted upon for a longer time. Similarly, the smaller diameter increases efficiency as there is a greater centrifugal force generated as compared to single-cyclones.

Secondary Air-Flow Separators have a secondary fan that skims off a layer of the gas just before its exit from the collector.

Just before the gas leaves the collector, the concentration of the uncollected dust particles is the highest.

Following this, the gas is returned close towards the inlet. At this point, the activity of the larger particles helps in the collection of those uncollected smaller particles.

Owing to this reason, secondary air flow separators can be installed horizontally as well.

How Efficient Is Cyclone Dust Collector?

With a two-stage dust collection system, cyclone dust collectors are well-equipped to handle both the coarser dust particles as well as fine dust.

Cyclone dust collectors are generally considered to be the cheapest and simplest dust collection mechanisms for air pollution control in industries.

With no moving parts involved, operation, as well as maintenance, is quite simple.

The efficiency of a cyclone dust collector is affected by the particulate size as well as the pressure drop.

When cyclone dust collectors of the same segment are considered, there can still be variation in the efficiency levels with changes in inlet velocity and pressure drop.

They are ideally suited for environments that have the following kind of workers – stone finisher, concrete cutter, granary worker, fiberglass worker, sandblaster, woodworker, granary workers, coffee roaster; among others.

Types of Dust Collectors and Their Uses