What is an Inverter Portable Generator and How to buy a Great One!

Do you live in an area where the utility power is becoming more and more unreliable? Or an area prone to natural calamities? Perhaps you’re planning to go camping or tailgating with friends at a site which is off the power grid. It is possible then you must have thought of buying a generator as a backup for your home or for use in emergencies.

Most people are deciding between standby and portable generators aka conventional generators. But not everyone requires generators to power their entire household or run 4-5 air conditioners at the same time as their refrigerators and all the lights along with the TV and microwave.

Some people require generators for short-term use with a few appliances as well.

With no large or heavy loads to turn on once the power utility is off and only a few appliances to be powered inverter generators can come very helpful in your situation. But first you need to understand what an inverter generator is and how exactly does it function differently from the conventional generators.

What is an Inverter Generator and how does it work? 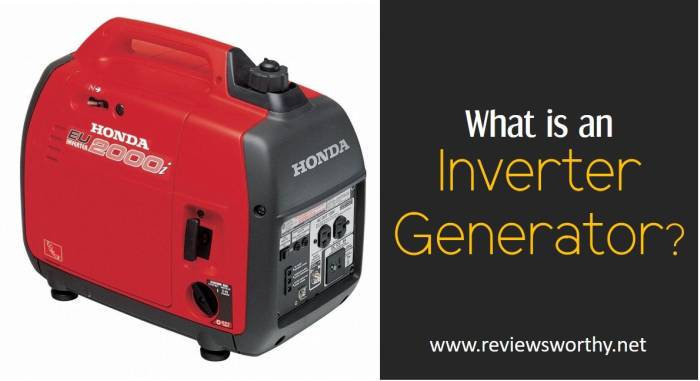 It is a recent technology and so it is easy for people to get confused regarding its functioning and process of producing electricity which is admittedly different from conventional generators.

An inverter generator produces AC power (which is the electrical power in our homes) like all conventional generators with the help of an alternator. But that current cannot be used directly and is called raw power.

This inversion is responsible for maintaining a constant flow of current in appliances because AC power is no longer in block waves but in sine waves.

How is inverter generator different from conventional generators?

Conventional generators which include portable and standby or whole house generators have been around for a good while and function on a basic principle which has remain unchanged and is easily understood by most of the buyers.

operates by using an energy source usually natural gas, propane, and diesel which power a motor attached to an alternator which produces electricity i.e. AC current.

The generator’s motor runs at a constant speed (usually 3600 RPM) to produce the required current. A governor controls amount of fuel supplied to the engine to keep it running at the same speed.

But it isn’t accurate and changes in alternator speed lead to changes in the voltage and frequency of the current which results in high level of harmonic distortions.

This isn’t the case in an inverter generator because of its double conversion system which produces a clean sine wave with low HD (Harmonic Distortion).

Inverter generators are generally three phase generators. They produce AC current like traditional generators which is converted into DC current and then, is inverted back to AC power which maintains a single phase, pure sine wave at the required voltage and frequency.

When DC power is converted to AC power you obtain a smoother electrical signal which is much safer for sensitive electronics and equipments. Also, some inverter Generators can vary speed according to power requirements.

Firstly they are very quiet in comparison to portable or stand-by generators whose noise level is quite high during operation which disturbs not only the buyers but also their neighbors. For fishermen, campers and hunters they provide a good deal of comfort outdoors without being too loud or unmanageable.

Construction sites and industries require the use of generators at odd hours and they would gladly prefer inverter generator’s 50 to 65 dBA (noise level quieter than a vacuum cleaner) over the rumble of traditional generators.

They are known to be 20% more fuel efficient than regular generators. For example, a 2,000-watt unit can run at its rated load for nearly four hours on a gallon of fuel. With conventional generators wastage of fuel if not used for long period of time on full load is a problem.

They can be inefficient at times. They pollute the environment for little benefit when they are not being used near their capacity. For example, running a 4000 watt generator to power a light bulb at 100 watts is essentially wasting a good deal of fuel for running a huge engine for very little benefit.

The current or electricity they produce is safer for sensitive electronics and equipment such as laptops and computers as it prevents harm caused by harmonic distortions.

Figuring out which inverter generator provides enough power for your requirements which lies in your budget as well is a crucial task. Sizing a generator is an easy task. All you have to do is follow these easy steps:

Make a list of all the items and appliances you’ll want to run during a power outage or absence of power. Items such as kitchen outlets, refrigerator, lights, air conditioner, washing machine, dryer etc. can be included in this list.

Get the power requirement

Note down the power of each appliance in watts. This must be provided in the tag or the manual of the appliance. Make sure you’ve got the running wattage and the starting wattage of heavy appliances such as refrigerator or air conditioner.

Now simply add the power of all the appliances. This sum is your minimum power requirement. Make sure you multiply it with 1.5 so that there is room for more appliances or during emergencies.

Sometimes you need more than 2 appliances to be run at the same time, especially when you’re outdoors and your requirements may vary during a storm. Therefore, it is advisable to invest in a large or medium inverter generator.

Details to keep in mind before buying an inverter generator

It is helpful to have a list of things to look for in an inverter generator when buying it. These help you shortlist the type of generator you want.

The first thing you need to know before buying an inverter generator is its fuel capacity. Calculate your power requirement and shortlist the models that provide that power.

Since they are smaller machines they are more suited for recreational purposes, however, models capable of parallel connection can be used for larger power output. It gives you the advantage of versatility and can be used for multiple purposes.

So if you are going to buy an inverter generator make sure you’ve got one that can function in parallel connection.

Choose an inverter generator from a reliable brand, if money is an issue then choose from a good company with a lower power capacity. You can later with the help of parallel functioning double the power output.

If you’re looking for powering up few appliances or if you’re looking for a generator that operates on a minimal noise level, is extremely lightweight and easily managed and portable and can be connected to another identical one for double power capacity then inverter generator is the one for you.

It has lots of benefits over the conventional ones and is much safer to use. Companies like Generac, Champion, Briggs and Stratton engineer good quality inverter generators which can serve various purposes.

Added to wishlistRemoved from wishlist -15