Protective gear for goalies is quite different from all the other positions, irrespective of whether it for men’s or women’s lacrosse.

This is because goalies are the absolute last line of defense that a team has and as a goalie, a lot of shots will be coming directly towards you.

Your gear has to provide protection and support while also letting you remain mobile enough to block shots from different angles and heights.

Therefore, regardless of whether you play men’s or women’s lacrosse, as men’s lacrosse tends to have more gear than women’s, the goalkeeper will always have a lot of gear such as gloves, shin guards, and helmets.

The parts of lacrosse goalie gear include gloves, a helmet, a throat guard, a chest protector, a stick, and a mouthpiece.

Female players at the high school level and below must wear thigh protection and shin guards.

The necessary parts of lacrosse goalie gear, for both male and female players at all levels, are explained below.

You can watch a 5-minute overview of men’s goalie gear and how it defers from regular gear here:

This video will also be helpful to women players as women goalies share a lot of gear in common with their male counterparts.

An informative breakdown of girls goalie gear can be watched here:

Let’s discuss the goalie gear one by one now –

Lacrosse sticks are, obviously, central to any player’s gear but the rules governing sticks for goalies differ from rules for other positions.

The main difference is that a goalie’s stick’s head tends to be much wider than other sticks’ heads.

The head can be up to 12 inches wide, for both genders, while for other positions it is generally 7 to 9 inches wide for women while for men it is 6 to 10 inches.

Goalies should also have longer shafts for their sticks for maximum reach. This maximum length is 60 inches for men and 44 inches for women.

A deep pocket with a soft mesh is a good choice to make to reduce rebounds while a tightly pulled mesh along with a shallow pocket is better for making clearing passes.

Tighter meshes also reduce the wear and tear on sidewalls.

Another benefit of shallow pockets is their accuracy while throwing as well as the longer distance that passes made with them can travel.

Chest protectors are universally required for playing lacrosse. A good chest protector should be form-fitting and not too bulky, otherwise, it will hamper your movement.

It should provide extra support and protection for the sternum and preferably cover the collar bones as well.

The coverage that chest protectors give is generally concentrated on the middle of the chest while also protecting the ‘cardiac silhouette’ or area near the heart.

This coverage consists of both padding and chest plates. Some chest protectors also have an attachable section to add stomach protection.

You should choose a chest protector which gives you movement as well as protection. In fact, some chest protectors use moveable plates which move with your body’s movements to give proper coverage.

Adjustability is also an important factor for mobility and many chest protectors come with straps to vary the positioning and tightness of the protector.

Lacrosse goalie gloves are specialized types of gloves and are different from the gloves that other lacrosse players wear. You should not use gloves meant for other positions interchangeably with goalie gloves.

Goalie gloves tend to have a rigid thumb for better protection against powerful shots. They also have more padding than regular gloves to be able to absorb the shock of powerful shots.

Because of this, more traditional gloves have extensive amounts of padding. However, this comes with a trade-off since padding, while giving protection, can also make the gloves heavier and hamper your mobility and grip.

Newer gloves tend to use less padding while also using a number of techniques to improve grip.

This can include changing the material inside the glove or silicone based padding on the fingers. It is also important to check the size of the gloves to ensure the best mobility and grip.

Aesthetics can also play into your choice of gloves as unlike many other types of protective gear, the same pair of gloves can come in multiple colors.

If the look of your gear is important to you then always check alternate color schemes for your gloves before buying them.

As far as helmets go in lacrosse, there is basically no difference between goalie helmets and helmets for any of the other positions.

There is also no variation between the sexes and the only difference is size. In fact, due to the standardization of helmets, brands such as Cascade even market one-size-fits-all helmets.

However, for women, headgear must conform to ASTM standards, which requires the headgear to fully cover the head, among other things.

The only difference between head protection for goalies and other players is that goalies must wear a throat guard.

This can sometimes come attached to your helmet but it is also common to buy it separately. Your helmet must have a facemask.

Helmets these days tend to be made of light yet strong material so that powerful shots to the goalie’s head do not cause injury to the goalie by imparting force to a sturdy but heavy helmet.

Some brands, such as STX, even add padding inside helmets which can be air inflated using a finger pump built into the sides of the helmet.

Aesthetic considerations are also important with helmets as you can choose to change the color of the chinstrap, facemask, shell, and visor, among other sections. 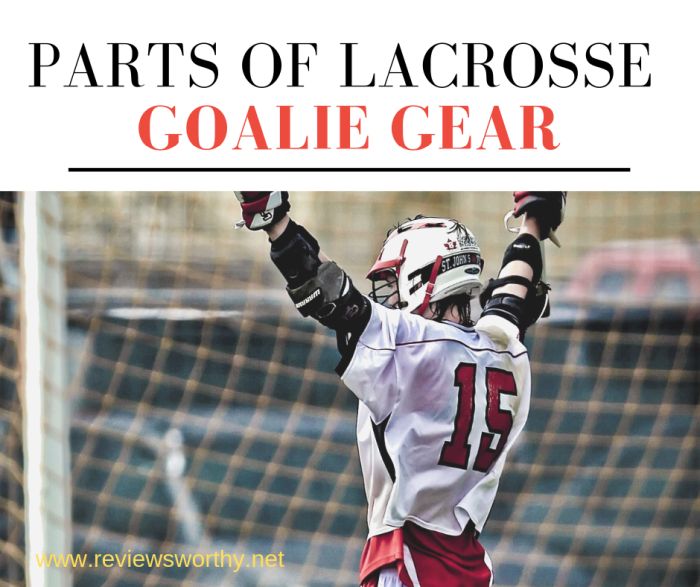 The throat guard is unique to goalies and can either come attached with the helmet or can be bought separately.

They are generally made of plastic and guards made by Cascade are the most popular ones on the market.

If bought separately from your helmet, they often have attachment instructions to join them to your headgear.

The mouthpiece is mandatory for players of both sexes.

It must not be clear or white. Instead, it should be in a highly visible color.

In addition, women’s mouthpiece rules specify that the mouthguard must not have graphics of white teeth on them.

Because mouthpieces go in your mouth, they differ according to the differing bites of players and it is, therefore, best to have one custom made for you.

Some mouthguards let you customize them by mixing together ingredients to form a mold which becomes part of the mouth guard while others are lined with gel which takes on the impression of your teeth when you bite them.

Many contemporary mouthpieces have a multi-layer design, with an outer rigid layer providing hard protection while a softer inner layer molding itself to the shape of your teeth and providing shock absorption.

This is required to be worn only by male players to protect the groin area.

Most cups these days are hard cups which need to be worn with cup-supporter underwear.

However, newer protective cups by Warrior now feature additional soft padding alongside and around the cup for a cushioning effect and broader protection and are highly recommended.

Shin guards are mandatory for women players playing at or below high school level.

They should not be excessively padded as guards which noticeably increase the size of the body are forbidden by the rules.

They will also hamper or restrict movement.

Lacrosse-specific shin guards are not very common and many stores specializing in lacrosse sports gear will often sell soccer shin guards, although brands such as Brine and STX do make them.

You should consider buying a hard-exterior guard which has a light amount of foam padding below it.

These days ultra-light shin guards are available which will not slow you down.

These pants are also mandatory for girls at high school level or below, and can also count as shorts required by youth level girl players.

As with shin guards, they cannot have heavy padding on them or else they will be illegal.

To improve mobility these pants generally do not come with a hard exterior or plate but instead have padding made with light foam which is designed to protect the thigh area from shots.

They have a snug fit, and are often marketed as being like compression shorts, and should not reduce your mobility.

These are mandatory for boys playing at the youth level.

Because arm pads are only required for youth level players, they are often geared towards beginner level players.

They often have design features such as a three-part body which fits around the elbow joint easily while also allowing for fluid movement.

Since you will only need armbands for the youth level, it is best to invest in an adjustable pad with straps so that you do not have to buy multiple arm pads and invest too much money in them as they will become obsolete after the player is 15.

Goalie gear is not just absolutely essential to ensure a safe game without injuries but is regulated by rules, which specify the kind of gear you can and cannot wear.

These rules vary by gender and age, although gear such as mouthpieces, chest protectors, and helmets are common across the board.

By knowing the kind of gear that is stipulated for you, as well as the latest technology and what to look out for, you can not only be protected from injuries but play at your best with the combined benefits of safety and mobility.