What is The Ideal Pocket Depth for a Goalie Lacrosse Stick

The ideal pocket depth for a goalie stick depends on the playing style. Players who prioritize catches and blocking will find deep pockets most suitable for them while those who need to make quick passes or shots over long distances will be served best by shallow pockets.

Choosing the appropriate stick for you is one of the most important decisions you’ll make in lacrosse as far as your gear goes and an integral part of your stick is the pocket.

The depth of the pocket determines both how effectively you can catch and cradle the ball as well as how accurately you can throw it.

Right off the bat, you should know that there is no such thing as an ‘ideal’ pocket depth which fits every single goalie.

Rather, the ideal pocket depth must be customized to your own style of playing and your preferences.

Read on to learn more about why pocket depth is important as well as the factors you should consider while choosing an appropriate pocket.

Pocket depth is important because it affects your ability to catch and make passes. Deep pockets can reduce or eliminate rebound and reduce whip, resulting in smoother passes. Lower pocket depth lets you shoot over long distances and give you greater accuracy and speed.

Pocket depth, along with the placement of the pocket, determines the ability of your stick to catch a shot, cradle the ball, and shoot or pass it once again.

The primary function of the goalie’s stick is to be able to block or catch shots and the depth should be geared towards this function.

Increasing pocket depth means that the ball goes deeper into the mesh and this reduces chances of rebound.

Rebound occurs when a powerful or fast shot is caught by the head of the stick but bounces out immediately. A deep pocket thus eliminates rebounds, giving you a clean catch.

An increase in pocket depth can also lead to a decrease in the whip of your stick. ‘Whip’ is basically the ability of your pocket to release the ball, in terms of both speeds as well as angle.

A deeper pocket will mean that your ball will release at a slower speed but with a less distorted angle. This makes for smoother passes.

While pocket depth is thus important for rebounds and passes, it also has an opposite effect which can make deep pockets inconvenient.

Due to the lack of whip as well as the depth, deep pockets are very bad for shooting long passes.

In particular, while deep pockets help you cradle the ball, this happens at the cost of being able to control the ball with accuracy.

The slow release of the ball from deep pockets also means that you can miss many crucial passes in the match because you just don’t have the speed required to make them.

Ultimately, you will have to make a trade-off between the two as stopping rebounds and increasing cradling leads to decreasing shot accuracy and speed. 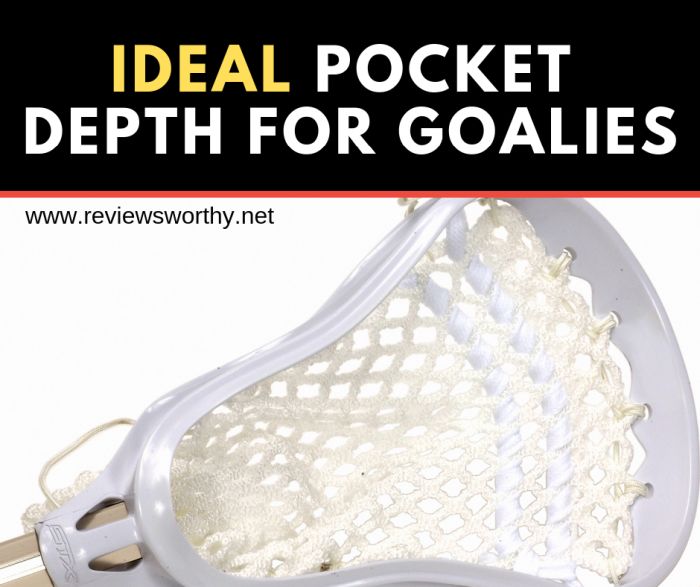 Factors on Which Pocket Depth Depends

The factors on which your lacrosse stick pocket depth depends are the pocket’s placement, i.e. whether it is high, mid, or low, your arm strength, which determines how far you can shoot, and your hand skills, which determine how soft your hands are. Personal preference and playing style is the deciding factor.

The depth of your pocket depends on the following factors:

The placement of your pocket refers to whether you have a high, low, or mid pocket.

The placement affects many of the features of the pocket and can be modified along with the depth as both can help counterbalance the effects of the other.

For instance, high pockets have a very fast release because the pocket sits near the top of the head and has less depth to it. At the same time, it has a lot of whips and the angle of the shot can vary a lot.

Mid pockets are the standard pockets that everyone generally starts with and are made for all positions and can have varying depths.

These give you the most flexibility and choice in terms of how you want to modify them to suit your needs.

Finally, low pockets have a slower release but are still good at cradling, although this is mainly for attackmen who use their sticks with one hand, while also making accurate shots.

The strength of your arm defines how well you can throw the ball, which affects the depth of your pocket.

If you are capable of throwing balls to a great distance then increasing the depth of your pocket will not hamper your ability to much as your arm strength will make up for the decrease in shooting distance caused by the increased depth.

Arm strength can often pose a problem to new players trying to experiment between pocket depths as they realize that the trade-off between shot accuracy and blocking capability is also largely conditioned by personal factors.

A number of drills out there focus on developing hand skills for goalies.

These drills are important because whether you have soft or hard hands also affects how you make catches and whether you need to increase the depth of the pocket or not.

‘Soft’ hands are those which are capable of absorbing some of the impacts of the incoming shot, which reduces the chances of a rebound. Goalies with soft hands can use a shallower pocket as the hand skills make up for the depth.

This 10-minute video covers this in a lot of detail:

The final factor influencing your decision in your own preference in terms of how you like to play.

If blocking shots and easier cradling is what you value in your game then you should definitely opt for deeper pockets.

However, if you think that your skills as a goalie are sufficiently developed enough to absorb shots without rebounds or if you find yourself making a lot of passes, especially over long distances, then a short pocket with a greater whip and tight shooting strings will be the one suited to you.

Ultimately, you will have to experiment for yourself to find out what pocket depth suits you.

Players rarely choose extremely shallow or extremely deep pockets but instead settle for depth somewhere in between which matches your preferences, skill level, and experience.

Pocket depth is one of the most important features of a goalie’s stick as it affects all the main areas of their performance and functions.

It determines the ability to block balls without rebounding, cradling capability, as well as the capacity to make shots and passes.

Deep pockets are ideal for blocking balls as they absorb the force without rebounding.

On the other hand, shallow pockets also for a quicker release and better accuracy while throwing, both of which are hampered by deep pockets.

In the final analysis, the choice of the pocket is determined mostly by your own preferences, along with your skill levels, such as your hand skills and arm strength, and your preference for the placement of your pocket.

It is a highly subjective choice and only experimenting with varying depths will help you decide the ideal pocket depth for you.