DEWALT’s DW735X is, in essence, exactly the same as the DW735. The only difference you’ll find between the two is the addition of the extension tables and replacement knives in DW735X’s box so you don’t have to buy these separately. Choosing between the two models, then, comes down to the degree of accuracy you need for your job and how frequently you’re going to use the planer.

A wood planer gives wood that smooth, flat finish coupled with even cuts that are the hallmark of great carpentry work.

The wood is fed into the planer which has a cutter head that cuts it to the desired thickness with the help of a guide wheel. Planers also help in creating perfectly parallel faces.

The DEWALT DW735 and the DEWALT DW735X are two of the best benchtop wood planers in the market with their powerful motor, dual speed gearbox, good chip ejection system and ease of use.

They are a good investment as they make customization easier and save money in the long-term by allowing the worker to dimension rough stock on his own. 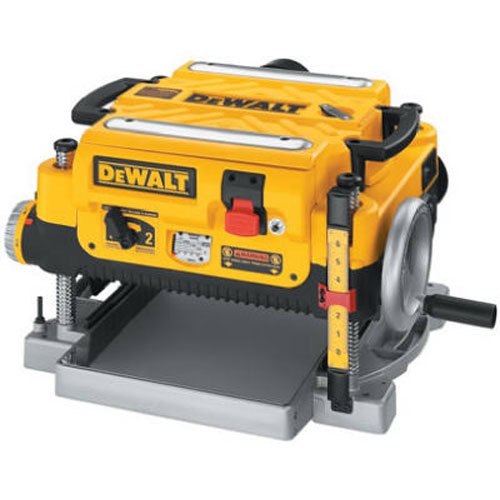 DEWALT is an American manufacturer of power tools and hand tools used in the construction, manufacturing, and woodworking industries. Founded in 1924, it has a wide, international customer base.

The DEWALT DW735 13-inch, heavy-duty thickness planer has a powerful motor of 15 amp, delivering 20,000 rpm and making it easy to handle deep cuts even in tough hardwoods.

It features a three-knife cutter head with a no-load speed of 10,000 rpm with longer-lasting, disposable knives that are easy to change.

The two-speed gearbox delivers 96 CPI when dimensioning material and 179 CPI for a finer finish.

The DW735’s depth capacity of 6 inches and width capacity of 13 inches along with a maximum cut depth of ⅛” makes creating custom materials easier.

A four-column carriage lock is designed to reduce material damage when planning near the end of a board, thus helping create clean custom stock.

Check out this video to understand the working of the DW735:

It is compatible with the needs of the professional worker but is better suited to beginners. It’s not a good fit for large commercial operations which requires bigger machines.

The cast aluminum base is also designed for extra rigidity and longer life.

Let’s have a closer look at this product with the help of this unboxing video:

This product comes with the infeed and outfeed extension tables which provide 33-½ inches of material support, helping keep stock in a flat position and reducing the possibility of snipe.

Also included in the box are an extra set of knives for the cutter head, to be changed when the blades become dull.

Changing the knives is a quick and easy process and the replacement set helps save time as the user does not need to resharpen knives every time, allowing him to focus on the job.

The DW735X also has a depth capacity of 6 inches, width capacity of 13 inches and a maximum cut depth of ⅛”. The extra-large thickness scale delivers accurate cuts with every pass.

The DW735X is the perfect planer for beginners who want the most accurate and cleanest cuts. It is a good addition to the home workshop and a smart investment for commercial contractors when working small jobs.

DEWALT’s DW735 and DW735X are essentially the same product with the only difference of two additional parts included in the box with DW735X. Here’s a rundown of the most important features boasted by these two models.

So, there you have it. The choice is between two nearly identical products. Both the DW735 and the DW735X are excellent benchtop planers and picking one over the other is dependent upon the nature of your job.

If you’re a beginner working odd jobs at home, the DW735 will serve all your basic needs. But for extra accuracy and ease of work, the DW735X may serve you better.